What a whirlwind the past few days have been!  I have been enjoying myself immensely!

On Friday,  Kiki graduated with high honors from Loyola.  Scott and I could not be prouder -  well, I may be a little prouder than Scott is,  but then I have plenty of reason to be!  I am nothing if not modest,  but Those in the Know can be forgiven for cheering loudly for me - after all,  it is no doubt due to my expert guidance that this amazing child has gone so far in life at such a young age.  With my characteristic generosity,  however,  I must insist that you cheer for Kiki also,  for her part in this great success story!  For four years Kiki kept her nose to the pedagogical grindstone,  (working part time, too!),  while still managing a lively social life,  a semester abroad and a blossoming romance with a fine young man.  I think that is the exemplary behaviour and well-balanced approach to life which ensured her success pretty good!  No doubt,  she inherited her admirable abilities from her father, who displayed a similar facility with time/life-management at an early age (<- piffle!)  me!

Here is my favorite photo of the day:  my one-in-a-million daughter in a sea of crimson! That was Friday.  On Saturday,  Jack had his senior prom,  so we hastily switched gears and turned our attention to corsages,  formal wear and gussying up the car for the occasion.  Jack probably also thought about these things,  although I am not quite sure since he went about with his usual daydreamy thoughtful air,  and I did have to remind him of the time when he wandered downstairs to play the guitar at 5PM.  However,  as soon as he was all kitted out in his formal duds,  it became apparent that he had been superbly organized all along, and much calmer than his parents  a wonderful evening was in store,  thanks to our  madcap, frenzied confusion  cheerful planning.  I think Jack enjoyed himself,  in spite of us  thanks to our efforts!

Here is our high school graduate (well, almost!  He graduates officially on June 3): 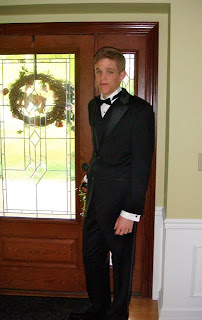 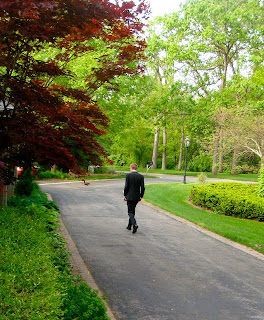 The second picture reminds me that he will soon be walking away into his independent future,  and he seems so capable and strong and ready.  Just as I felt with Kiki and Jessie,  the thought fills me with  wistful nostalgia - how quickly they grew up!   joy - how pleasant to think of a job well done (by Yours Truly)!

In other news,  my faithful readers will be surprised delighted to hear that I have finished the passport applications and even have sent them off!  I am nothing if not diligent and,  although it did take a tiny bit longer than I had planned (through no fault of my own, obviously),  I am confident that the delay was worthwhile.  Jessie and I were able to have much nicer photos taken in May than we could possibly have had done in February.  Let's be honest, here:  those passports are good for five years - I,  for one,  was not eager to have a dreadful photo of my pallid winter-weary face brandished about all over the world if I could help it!  So,  obviously,  my so-called procrastination was,  in fact,  a cleverly concealed plan to ensure minimum quality standards.  The fact that both Jessie and I were grounded in-country for a couple of months while I flaked out on this  waited for the optimal time to proceed is immaterial - priorities are priorities.  That is just the sort of thing which differentiates me from your average person - I think about the important things.

Next,  I will get Edward and Kenny's passport applications sorted out.  They should be much simpler to do,  so I expect I will have them in the mail eventually  shortly.

I am still impatiently  patiently awaiting the pond plants which I ordered online some weeks ago.  I sent a curt pleasant inquiry to the company last night and they promptly replied promising to ship them this week.  A word to the wise:  the squeaky wheel gets the grease.  No need to thank me.

There were other things I hoped to write about today,  but I am already chafing to get outside on this glorious day  too busy to write much more today.  That just means more for tomorrow!

Good day to All!
Posted by NiftyWriter at 11:36 AM