*Really! (but not all at once)

I grew up in a simpler age.  It was an era when the weatherman was just a weatherman.  Little boys and girls rarely aspired to grow up to be like the weatherman because he (it was always a "he" back in the olden days) was quite simply the lowliest peg on the network news totem pole.  Their childish disinterest (and the lowest peg position, incidentally) was totally justified by the weatherman's utter lack of pizazz.  I am not one to criticize,  but let us face facts:    I used the term "simpler age",  but the weather back then was really just boring and the weatherman was as dull as dishwater.

Therefore,  I am delighted to report that these days we have a new breed of weatherman -   the "Chief" Meteorologist - who has finally brought the weather segment into the 21st century - not to mention a well-deserved seat at the anchor desk - with creative razmatazz.   Unlike the unimaginative weatherwonk of old,  the Chief is forever discovering new and infinitely more interesting weather phenomena than we had when I was growing up.   Who knew that weather could be so much more than clear, overcast, rainy, snowy, windy, warm or cold?

Back in the day,  even when two weather fronts appeared to be on a collision course (now there is an exciting weather story just begging to be told!),  the weatherdullard would shuffle on camera and mumble about an upcoming change in temperature - "overnight lows may fall to near freezing" (ho hum) -  possibly accompanied by the hopelessly vague and uninteresting "mixed precipitation".   These uninspiring pronouncements were invariably delivered in a monotone guaranteed to solidify the reputation of the weather segment of the Evening News as the generally accepted snack/bathroom breaktime of TV viewers everywhere.

The Chief,  when in possession of similar meteorological evidence,  teases viewers during the opening segment of the nightly news with a little preview - something like , "Hang onto your hats, folks!  There is wild weather coming!".  This guarantees that viewers wait with bated breath through a half hour of boring world news and stupid sports stories before he wows 'em with the exciting prediction of my favorite new weather phenomenon :  Thunder snow!  Forget dull talk of temperature fluctuations and mixed precip*,  the Chief brightens our lives with the expectation of something wonderful:  "Tonight,  be prepared for the possibility of thunder snow!".

Thunder snow!  Yegods!   Who can fail to feel a thrilled shiver run up one's spine at such a forecast?  Thunder snow is mythical!  It is epic!

Usually, what follows is a night with temps falling to near freezing along with a little wind and maybe some rain and wet snow.  Once in a very great while,  alert listeners might detect the distant rumble of something like thunder  (which may or may not just be the wind,  but why quibble over details?).  Now, that is weather!

The most exciting forecast I ever heard growing up was the dreaded RDF (rain, drizzle and fog) - a particularly bone-chilling cocktail of weather misery which gripped St John's for three straight months every spring.  Not only was it bone-chilling,  but it was boring.  The only relief from the tedium came in the form of sporadic spring snows - events which the weatherman would announce with predictable lack of fanfare as "4-6 inches of snow possible"  or  "significant accumulations likely".  Thanks to the deadpan delivery of the dowdy weatherbore,  nobody would bat an eye,  let alone consider a school closure,  to the fury of yours truly  to the disappointment of countless schoolchildren.

The Chief,  ever ready with a snappy, attention-getting forecast,  is a schoolchild's hero.  A spring snow is not merely a spring snow anymore:  the Chief predicts a snow bomb!   The ensuing 4-6 inches of heavy, wet spring snow may seem to be as short-lived and unremarkable as the boring snowfalls predicted in former times by lesser weathermen,  but it takes the Chief to inspire sufficient awe of the elements to guarantee that school officials declare a pre-emptive snow day after the evening news but before a single flake has fallen.  Now,  that is impressive!

Last week,  I saw yet another new weather alert that definitely grabbed my attention.  What the boring old weatherman merely called "dry weather"  or "no chance of rain",  the Chief calls fire weather.  Fire weather!  Is that not the most evocative and terrifying new weather phenomenon ever described?   The Chief is ever-ready to provide these alarming amazing and interesting new names for what was once just boring, old weather.  And people overreact with alarm interest, naturally.   Some people think the Chief does a disservice to mankind by whipping up a frenzy of false "weather-emergency" readiness every other week to boost television ratings,  but I,  for one,  am delighted!  Finally,  relief from the weather tedium of bygone days.

The idea that hyperbolic weather terminology could be playing into a general existential hysteria by feeding fertile and overwrought imaginations with terrifying imagery is,  let's tell it like it is,  pure bunk.   People enjoy thinking about the same old weather repackaged as new, exciting and terribly slightly dangerous!   Goodness knows,  it isn't as if people are apt to believe that there is anything chillingly prophetic about the same weather patterns, climate cycles and natural phenomena this beautiful world has been experiencing for many millennia just because they are suddenly described  in new and frightening interesting ways!   I must say,  I am a little disappointed in those not in the know who worry about the bogeyman around every corner!

I have been ignoring struggling with this blog post for days now and I have decided that it is simply time to give up move on to another topic.   Time to mention what is new in my life:

Jessie is home for a little break after finishing her second year at university and before starting her summer research project back on campus.   It is always a pleasure to have her home,  even if she does talk a little too much and distract me from my usual lazy time-wasting highly productive daily routines!

Kiki is graduating this weekend.   I can hardly believe that she has already completed her university degree!   We are all looking forward to a wonderful weekend celebration.

Edward received an award last week for a story he wrote!  He placed second in his school overall for his story The Book of Jade.  I had no idea always had a feeling that boy had writing talent!

I have been spinning my wheels, as usual  a little disorganized due to a very busy week,  so I intend to make the most of my characteristic flair for time-management by making an updated To Do list:

Passport Application  (EGAD!  Forgot all about that!  have been too busy!)

Blast!  I think I have already lost  am in danger of losing my momentum here for the day.  Best get off the blog and on to moving mountains!

Good day to All!

Today's photo:  the weather has been simply dreadful for over a week now (coinciding exactly with my inability to finish this blog post, interestingly),  but here is a picture taken back when the weather was fit for human (and canine) consumption:  Minnie gamboling in the garden! 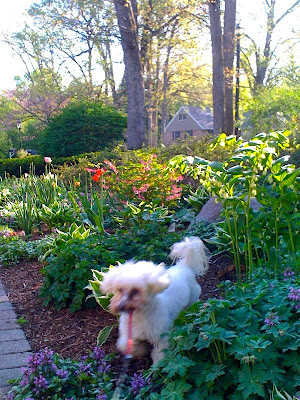