Good Morning to all Those in the Know!  It's another lovely spring day here in the Midwest and I,  for one,  intend to make very good use of it!

Before I go on to move mountains today,  however,  I thought it was time I submitted a little update on the photo project.  As most of you may recall,  I've been so busy lately that I've had to scale back a little on my photo project hours.  Actually,  it's been necessary to scale back quite a bit.  In point of fact,  the Photo Project hours have been scaled back to zero for weeks  to a bare minimum lately as spring chores have taken front stage.  While I am a woman of prodigious energy and industry,  even I cannot do the impossible.  As the spring chores list grew,  I decided it was best to put the Photo Project aside temporarily while I attend to something new and infinitely more fun urgent seasonal matters.

First, it was the Spring Break road trip.  Naturally,  I did it all for the children (whose slumped posture and gloomy countenances owed everything to the sleep deprivation of excited anticipation and nothing to disinterested reluctance to leave their friends and drive for 3 days up and back,  to go work in the garden in SC),  but the price I had to pay was  freedom from the vexing Photo Project for 10 whole days!  a regrettable interruption in my Photo Project routine.   It was unfortunate,  but there you have it.

Next, we returned home just in time for Easter.  Kiki came out for Saturday night and Sunday brunch and of course we had dear Benjamin visiting from Germany.  It was a lovely weekend,  but I can't help pointing out that once again,  I had to do everything!  I said as much to Scott as he was preparing the vegetables for the BBQ Saturday night:  apart from laundering and changing the sheets in the guest room, tidying the house, grocery shopping and preparing every meal until his escape departure for an overseas trip on Sunday afternoon,  what exactly had he done for me, lately?   Fortunately,  I am the sort of person who can always make lemons out of lemonade,  and so I managed to squeeze some refreshment out of the taxing Spring Break road journey in spite of the many demands upon me!   But,  you can see how difficult it was to eke out a little time to devote to the Photo Project!

The following week was a blur of activity as Scott was out of town on business and I had a houseguest, too!  The boys, including Ben, did virtually every household chore that cropped up and then some   did occasionally chip in with the odd chore around the house,  but as usual,  it was up to me to ensure that our happy home was running smoothly and efficiently.   I was so busy!   Road Trip laundry (the boys always forget something!),  tidying up,  planning and preparing healthy yet tasty suppers fixing my nails,  browsing the web,  fussing with my hair, watching NCIS reruns at night,   and  vacantly staring at walls while daydreaming  other stuff.   It was a wonder that I found time to sleep,  to be perfectly honest.  I don't know how I keep up my strength sometimes.

I've already mentioned the lively social gathering we hosted here on Saturday night.  What a  noisy delightful crowd of teenagers in Jack's class!  Why,  we had probably 25 young people here but one would never have believed the cacophony  have guessed it!  And what ravenous healthy appetites!  Why,  I believe those kids devoured the food like a swarm of locusts  really enjoyed the refreshments!  Scott was kept on his toes running back and forth to the basement fridge bringing up fresh pizzas to cook, ice for drinks and supplies of soda.  I must say,  it is a pleasure to watch the young people socializing and I am so gratified that I was able to create just the right atmosphere of warm welcome.  It's a gift.

But,  what I know you are all waiting to hear about is my favorite activity of the weekend:  gardening!   Yes,  I can almost hear your astonished,  yet admiring gasps of delight.   I am nothing if not brimming with pleasant surprises!

As busy as I was hosting parties and maintaining our happy home,  Those in the Know will not be too shocked to discover that I also performed miracles in the garden over the past few days.  Yes,  while others enjoyed the fruits of my domestic labours this weekend,  I was putting my considerable talents to work outdoors in the garden as well!

The weather was absolutely gorgeous so remaining inside was obviously an intolerable prospect.  Sure,  it was fine for Scott (who had a lot of work to do anyway- see above),  but a woman of my artistic  (yet amazingly stable) temperament must have a wider canvass upon which to create her magic.   As soon as I had the situation in hand on the domestic front (with just a little guidance,  my expertly reared children and excellent spouse are nearly as capable as Yours Truly at whipping our home into tip top shape,  thanks to my relentless demands   tireless teaching efforts),   I  abandoned them all without a backward glance  left the party preparations in their capable hands and tripped off to the Garden Center for an hour of sheer bliss,  browsing the aisles for ideas for our perennial and shrub garden.

Well, it would have been sheer bliss if the Garden Center hadn't let down the side a lot! a little on their end.   To my fury disappointment,  my trip was nearly wasted because the Center had very few shrubs and virtually no perennials in stock.  Sure,  it's a little early in the season and this time last year we were still having hard frosts and even the odd snowfall.  Actually,  I understand that most years April is an uncertain time for gardening in this part of the country due to the wildly shifting last frost dates and so forth.  Be that as it may, however,  I really feel that a good gardening store should anticipate the needs of its clients and be prepared to supply them with nursery stock whenever they need it.  We are having an early spring this year and I want  people would like to enjoy it!  This business of tailoring inventory to the normally expected seasons is nothing but a nuisance to the serious gardener (ahem - your faithful scribe?) who ought to be able to purchase whatever she wants whenever she wants and damn the (garden center's) expense (not to mention the family bank account <- misses the point ).

Nevertheless,  Those in the Know will surely anticipate that even the incompetence of the local Garden Center's management could not diminish my determination to avoid the usual boring Saturday chores  enthusiasm.  After flicking an irritated glance here and there taking a thoughtful look at seeds, shrubs and garden tools and supplies,  I purchased a couple of basic spades,  pruning shears and new gloves and headed back home.   I decided to prune our existing shrubs and transplant a few perennials which were planted in totally unsuitable locations.  (This was completely accidental,  by the way - I was terribly impatient  rushed last spring and didn't bother  forgot to consult my garden books before planting <-- could happen to anybody).

There was an awkward moment after I returned when Scott's face turned an odd ruddy shade as his gaze ranged over my newly purchased tools and gloves.   I really feel that it is a little insensitive of him to point out,  however mildly,  that I already have a cupboard out in the garage that is bursting with spades, pruning shears and gardening gloves.  It is part of my Spring ritual to purchase whatever I happen to fancy that day a modest selection of fresh new tools and gloves  (I can't help it if I keep forgetting what I already own and besides,  it is annoying how dirty those things all get,  and I hate using dirty things <- understandable!)  and one would think that a supportive partner would encourage such a flair for tradition.  But,  I am nothing if not sweetly forgiving,  so I gave him an understanding peck on the cheek and suggested he get back to the party preparations while I pull off another one of my astounding garden transformations.

I spent the next several hours on Saturday and much of Sunday mostly standing around leaning on my shovel listening to the birds chirping  hard at work in the garden,  digging up perennials,  pruning shrubs and clearing away winter debris.  By the time I was finished,  most of the beds looked wonderful in their early-spring state of expectancy.  Fresh green shoots are peeping out of the old growth from last season,  flower buds are just barely visible on some of the early blooming lilacs and nearly every tree in the garden is budding out and will no doubt have leafed out completely by the end of the week if one can trust that the weatherman was telling the truth when he predicted warm temperatures and sunshine for most of this week.

I even returned to the Garden Center several times  once or twice and came home with two new hydrangeas to plant on either side of the lovely blue hydrangea given to us by Kiki and Dennis last spring.   That shrub was one of the ones someone (moi) incorrectly planted in an unsuitable spot.  I transplanted it to a sunnier and better-protected location behind the house and then planted the two new hydrangeas on either side of it.   There will be a beautiful symmetry to this arrangement when the shrubs bloom later this year for the center bush will be covered with heavenly blue mopheads while flanking it will be two "blushing bride" shrubs covered with exquisite creamy rose mophead flowers,  in honour of my darling daughter,  soon to be a bride herself.

Well,  I could go on all day about my achievements in house and garden but I am a busy woman and have much more to accomplish before the sun goes down today!

Photo of the blue hydrangea flanked by the two "blushing bride" hydrangeas:  (sure, they don't look like much now,  but just wait a couple of months:  this will be gorgeous!) 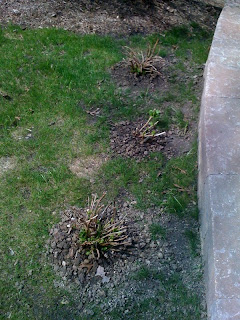 Posted by NiftyWriter at 2:55 PM