I wish I had thought to take photos before doing all of this yardwork!  Unfortunately,  Those in the Know will have to try to imagine how terrible it all looked before and therefore appreciate how much better it now looks.  I am thrilled with the results of the landscape service team's diligent effort!  As I was saying earlier,  few things irritate me more than people who rush through a job.  The team took an appropriate amount of time and care and the finished product is a testament to (my) patience and (their) hard work!

Along the side of the house here,  the entire yard was torn to pieces during the renovation.  This was a beautiful garden pathway before,  lined with hostas and daylilies and it broke my heart to have it destroyed like that.We had to have a tractor in to level the ground again, (it had been completely dug up and left in mounds).  Then, we had to reseed the entire thing.  We did that last year,  although it has yet to completely fill in.   For most of the past 2 years, the grass has been sparse, the daylilies nearly all gone and no hostas appeared to have survived the renovation catastrophe.   This is a large area - far more than I could manage to repair on my own - so this is mainly where the landscape team did their work.  Anyway,  while I was out preparing the area for them to start edging and relocating divided hostas from other parts of the garden,  I discovered, to my joyful astonishment,  that some of the old hostas that once lined the pathway were attempting to resurface out of the compacted earth!  The heavy machinery, trucks and tractors had crushed them and buried them under tons of gravel, dirt and construction debris,  and they had nearly all died.  However, after a year of rest, a few hardy specimens were struggling back to the daylight!  The crew replanted them along with the transplants from the front yard.  Now we have the beginnings of a renewed hosta- lined pathway! 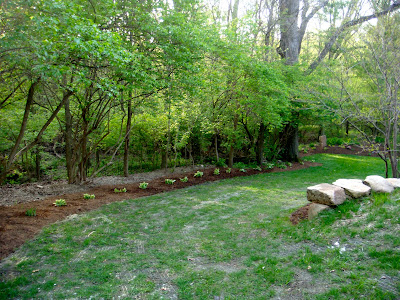 The other big job that I needed the crew to tackle was the transplanting of 4 lilac trees which had been completely enclosed in shade because a dogwood,  several other lilacs and an evergreen that the original owners of this house had planted years ago grew up and surrounded them.  They relocated three of them to other spots in the front yard and I had them place the smallest one in a sunny,  protected spot  between some low evergreen shrubs on the same side of the house as above. 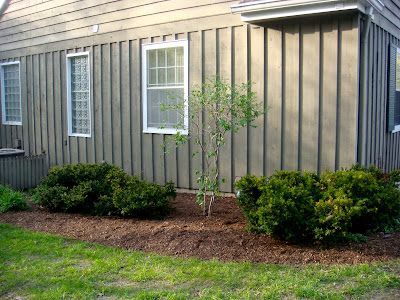 Here is one of my favorite plants in the garden - Dicentra or Bleeding Hearts.  I have a soft spot for these because they grow so well in my native Newfoundland and were one of the first perennials that I came to recognise when I was a little girl.  The flowers are heart-shaped and easy to remember.  However,  the graceful arcs of flower fronds and the way these shrubs show up so beautifully under trees and in shady spots keep them well up on my "favorites" list!  I am putting two pictures here - the first is of two lovely specimens under the trees on that same favorite side of the house and the second is of a new plant which self-sowed about 30 feet away from the first two!  Love it! 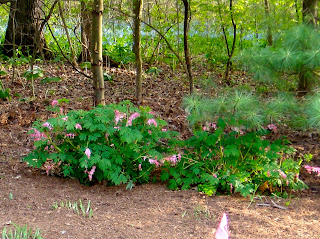 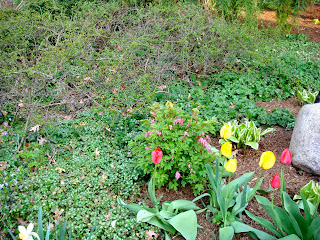 Now,  here are those hydrangeas I showed you the other day - only now they are in a nicely-edged bed and have a little mulch around them!  Also,  the second picture is of the bed Scott and I dug last year and into which I planted three hollies, two variegated weigelas (I think these are what Dad always called "beauty bushes") and yet another lilac.  I may as well admit that I love lilacs.  Love, love, love them!  The previous owners of this house also seem to have loved lilacs (check back in a couple of weeks and I'll have photos to prove it!),  but they planted a sea of hybrid lilacs---Korean lilacs and similar.  I like these very much (wow!  are they prolific bloomers!),  but I have to admit that, once again,  a childhood favorite still holds the warmest spot in my heart - old-fashioned lilacs,  preferably in tree form.  So,  I added an old-fashioned to that back bed and one of the rescued lilacs from the front is a vulgaris  (common or old-fashioned)  and that is the one I had them put in by the evergreens where it can really stand out.  These  variegated weigelas are another of my dearest favorites.  When they come into bloom I'll show you why! :D 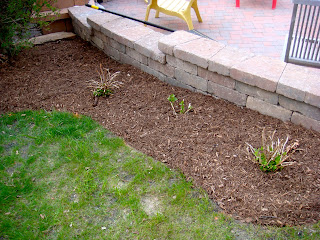 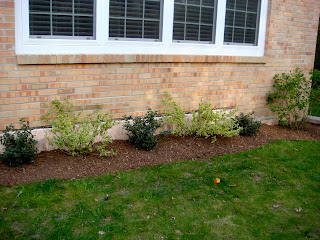 Last photo:  Here is our little Easter Island.  (chuckle)  It was my brilliant idea to have those huge rocks placed around the garden back when we tore up the old pond because the original perennial garden had no permanent feature plants.  It used to die back to nothing every winter.  I felt that, until time and my efforts could renovate the garden itself so that there would be interesting features in it year-round,  the rocks would provide some permanent features and varying heights.  Instead, it came out looking like some sort of stunted Easter Island!  At first I was a little bit dismayed,  but as often happens with unsuspected brilliance,  it has grown on me!  The only things missing are the assortment of garden gnomes and faeries that I had planned to scatter about the garden,  peeking around the rocks and out from under the shrubbery.  To my fury disappointment,  Scott insisted that I abandon those plans.  I am not one to dwell on the short-comings of others,  but I cannot help but wonder how a man as intelligent as my spouse (after all,  he showed impeccable judgment - not to mention good taste - in his choice of a mate!),  can fail so miserably to appreciate good landscape design!  But never mind!  I am nothing if not adaptable and I continue to derive pleasure from this (somewhat impoverished) vista anyway!  (Bonus: get a load of that glorious flowering crab in the background!) 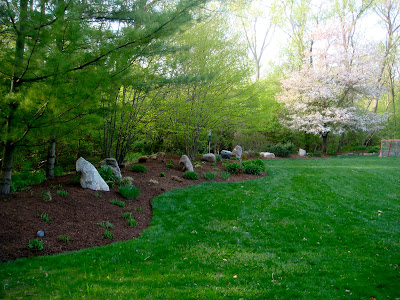 Well,  that's it for the photos tonight!  Maybe I can update through the summer as the perennials develop.   I may add a few more perennial plants and possibly some annuals (which, naturally, depends on how busy I am over the next month or so!)