Well, one good thing about all of this spring ahead nonsense is that it is usually quickly followed by Spring Break.  Such is the case in this household,  I am pleased to report.  It's a relief when the bureaucrats who run our lives get something right!

The upside to a Spring Break is obvious (well, at least for the schoolchildren;  just as obviously busy parents like myself get no break at all--where is the hope and change, I ask you?  It's woefully thin on the ground around here!),  but the downside is that I will have far less time to blog for the next 10 days or more.  I will make a superhuman effort (don't I always?),  but the fact remains that I will be busier than ever and something may have to give.  Of course, I could give up fun stuff like watching hours of NCIS at night - therefore getting everything done -  but NCIS is much more enjoyable than struggling to post on this blog,  so it stays and the blog goes.  I don't want to hear any grousing.

Yesterday,  I took Jack for a campus visit to one of the universities on his shortlist for next fall.  I say "shortlist" because that is what one says in this situation, but the reality is that his list is no shorter now than it was last October when it seems he was picking my pocket every other day to pay an application fee to yet another institution.  Sure, his excellent grades, hard work and future ambitions are important, but I want to know why I have to do everything!   It was a beautiful day yesterday and instead of staying home so that I could sit indoors doing bills and wasting time typing foolish blog posts while pretending that at any moment I was going to get outside in that glorious sunshine be outdoors walking in that glorious sunshine,  I was instead forced to tour a campus with Jack and Kiki (and, incidentally, outdoors walking in the glorious sunshine all afternoon,  more than any other day yet this spring!  <-- not the point).  Anyway, it was wonderful to spend the afternoon with Kiki on her school turf  (she rocks! a bit like her mother, actually),  even if it was inconvenient for me,  and I think Jack felt lucky to have a Senior tour guide.

I don't know if he is any closer to making his decision,  but it is not from lack of effort on my part, as always!   I have nagged him incessantly gently nudged him toward a decision throughout the winter, but I am nothing if not a wise and patient mother,  so I am simply allowing him to come to a measured and hopefully quick!  careful decision.  With that goal in mind,  we are heading off tomorrow to Ohio for another campus visit,  this time with Jessie as our guide.  This happens to be working with our spring trip plans,  because we will then continue on to South Carolina for a few days R&R.  But Those in the Know are well aware that even if it hadn't been so convenient for me,  I would have made the supreme sacrifice and given up a day of my precious time to get him down there for this purpose.  Parenthood is my vocation,  although heaven knows I never make an issue of it.

In other news this week,  I have been bombarded with yeas and nays regarding the no doubt ruinous Healthcare Reform bill which the House of Representatives just passed.  I'm just going to go on record right here in my blog by saying that all of the fuss and nonsense has been very irritating,  and the so-called showdown vote on Sunday was (let's just tell it like it is) practically a non-event.  Some of us had better things to do (ahem, NCIS?), and I for one had important family dinners to prepare as well.  Sure, I did my civic duty by standing in the den for nearly 10 straight hours glued to the coverage of the tense, fascinating hours leading up to the climactic vote only running out to check on dinner or grab a glass of water by checking in with CNN from time to time,  but if I am to be perfectly honest, it was all a bit ho-hum.  It's all bad enough that we had to endure months of obsessive news coverage of this stupid bill,  but blanket coverage by CNN on Sunday seemed a little much when some of us might have been wondering about more important things like Tiger's return to golf or how Lindsay has been doing since the Olympics.  I am often shocked by the misplaced priorities of these giant news stations- it's a scary trend!

Anyway,  when the dust had settled,  the votes were tallied,  and the shameful perfectly understandable name-calling was over,  the bill was passed and now we will all have to cope with the consequences.  I don't mind telling Those in the Know that I think this is a terrible thing for the country.  I don't know how these idiotic lawmakers expect those who have earned it (like Yours Truly)  to maintain our well-deserved privileges and first-in-line status for cadilac healthcare  after all this messing with the "system".

Look, the "system" has worked just fine for decades!  Those of us fortunate enough to have jobs with insurance benefits who work hard enough have health care and the rest of those lazy galoots do not!  What was so bad about that?  Sure, it can be tough for some, but people get what they deserve.  Our best-in-the-world (for the privileged few who actually deserve it!) Healthcare System (soon defunct, thanks to this ruinous legislation)  is just like the inerrant truth in the Bible as preached by our fundamentalist friends (who know a thing or two about exclusion!):  millions may not like it,  but since they have failed to invite Healthcare into their lives through their own physical or financial misfortune or helplessness as little children laziness and poor planning,  it is right and just that they be excluded.  Hey, those of us with healthcare coverage may not give a hoot about anyone but ourselves like the situation,  but what is right and just is not always pleasant.  I can't believe this excellent "system" is being changed!  "Reform",  my eye!

It's time for all these bleeding heart liberals to just get with the program and stop mollycoddling the sick, the lazy and the criminal.  Heck, don't they even notice how babies, children, elderly and poor people contrive to be sick all the time?  Are they blind to the fact that most of those fetuses that good citizens fight to force disadvantaged women to carry and bear,  regardless of the cost to the women psycholgocially, physically and financially  save never ever seem to have healthcare insurance once they are born?  Ungrateful freeloaders!  I'll never understand why anyone wastes an ounce of energy forcing their own twisted morality on trying to help other people when these people just turn around and mooch off the "system".

Yes, it was a sad day for America and doubly so for Yours Truly who gave up hours of NCIS because of that televised drivel.  Millions of undeserving louts  mainly babies, children, chronically ill, and millions dealing with various misfortunes which have precluded them from the security of access to the healthcare we all need and deserve  will now be included in this country's great pool of medical resources along with those of us who really got lucky deserve it.  No doubt, it will inconvenience the rest of us terribly, and even if it does not, I don't see why others should enjoy what we enjoy just because they are human beings and citizens of this great Republic!

I must admit, though, that my aggrieved feelings were somewhat mollified by the personal note of thanks that I received from the President shortly after he gave his speech from the East Room.  I must say,  I do appreciate how quickly President Obama gets down to the important tasks like thanking respected taxpayers like myself for a job well done.  Yes, as I said, while I did briefly feel a little vexed by all the hullabaloo,  and certainly it is irritating to think of these unnecessary changes to the perfectly fine status quo,  I am nothing if not generous and as such, I am glad to have contributed in my very small way to such an historic and important moment.

I've a dozen things to do today before we depart in the morning, so I am going to have to stop here and hope that there are not too many typos in this post!  If there are,  I hope Those in the Know will show a little tact and diplomacy and don't mention it.

Have a Good day, All!

Todays photo (taken yesterday--this looks to me like youth opening the door to the wide horizon of the future--no doubt bursting with bleeding heart liberal ideals and other foolish notions-- :D): 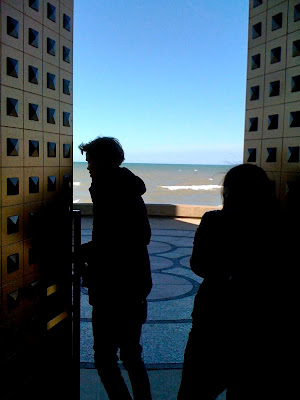 Posted by NiftyWriter at 3:28 PM