Yes, I do realize that it is actually afternoon right now,  new time,  but I feel it is only sensible to ease oneself into these arbitrary switches in time zones.  My body and mind preferred old time (especially those brighter mornings) and, while Those in the Know already know that I am not one to make a fuss,  I must gently point out that this annual theft of an hour of our time is a terrible idea bordering on criminal.

"Spring forward, Fall back"- what idiotic nonsense!  I don't mind the part which says 'fall back' in October, and indeed, that is an idea which has obvious merit,  not to mention popularity, but the spring segment is clearly a serious clunker.  Why not simply "fall back" in both fall and spring?  Now that would be a truly inspired idea and I've no doubt that the people would stand enthusiastically behind it.  Do I have to think of everything around here?  It's so obvious!  The stupidity and short-sightedness of our elected officials never ceases to amaze me.

Anyway, I am defying the powers that be and baking a pumpkin pie today.  It is my plan to fool the olfactory centers in my family members' brains into thinking they actually gained an hour last night rather than lost it, by filling our home with delicious autumn aromas. That's the kind of helpful little thing I often do for my loved ones.  Not everyone has the keen sort of mind which can imagine such a creative solution to bureaucratic madness, but I make it a habit not to shine light on the shortcomings of others.  Astute readers will simply take this useful tip to heart and follow suit and nothing more will be said about it.  You're welcome.

Photo Project Update:  It's been a difficult weekend all round,  if the truth be told.   I've already shared with my most excellent readers what frustrations and aggravations I have endured with my latest photobook.  I am nothing if not persistent persevering, however, and so I made the supreme effort to finish the book and get it submitted on Friday night or Saturday morning.  The actual time is a little hard to pin down because, through no fault of my own,  I had to make numerous upload attempts because of operator error buggy software and silly typos, omitted details, poor punctuation general issues (mostly software-related).  It took me a while to realize on Saturday morning that the book had been uploaded and was probably nearly finished printing while I was still trying to upload it again.  This could have happened to anybody.  Especially with that wretched MyPublisher software!

But, Those in the Know already know that I am nothing if not resourceful,  which means that I do not let the deficiencies of others limit my own productivity!   I succeeded--beautifully,  I'd say,  if modesty did not prevent me from saying so--in completing a masterful work which is little short of poetry in pictures and layout.  Any minor defects such as spelling errors, too much text for the clearly marked text boxes or incorrectly uploaded photos are purely the result of the defective software and poor customer help service.  I ought to know,  after being forced to contact the CS reps over 20 several times to complain for assistance with simple issues that ought to have been ironed out by their tech team ages ago.

Interestingly, I received a virtual blizzard of emails this morning claiming a new and improved version of MyPublisher for Macs,  which apparently will address every single one of the issues I was having.  Well,  I'm sorry to say, but that is pure bosh.  The version they claim will set all to rights is the very one I just downloaded!  Although, it is possible that they have worked round the clock since hearing from me and have corrected the vexing issues.   Actually, now that I think about it, that is probably exactly what happened!  No doubt they have sent out the flurry of emails to thousands of grateful customers thanks to my helpful persistence in showing them the deficiencies in their product.  Busy though I was,  I was happy to help.  If they have any decency at all,  they'll mail me a substantial discount coupon for my trouble!

You may wonder how I rewarded myself for a job well done yesterday when the first photobook was finally, if imperfectly, in production.   Certainly,  almost nothing would be adequate recompense for the exquisite work I have done under incredibly trying circumstances, not to mention the priceless service I provided for mankind in the process (you're welcome, World) but my dear Friends in the Know probably already anticipate what I am about to announce:
I didn't take a break at all!

Yes, with my characteristic energy and peerless work ethic, I merely paused to make a fresh cup of tea before forging ahead with the next photobook!   However, I am determined to avoid the difficulties I encountered the first time round, and so with that in mind,  I decided to do a Google search to find a more Mac-friendly company to use for the production and publication of my hard work.  I googled mac-friendly photobooks  and was directed to an article in MacWorld which mentioned that if a Mac user is not satisfied with the Iphoto program for making photobooks,  he or she could go to ...

Hold on just a minute there!   Did you catch what I caught?  "if a Mac user is not satisfied with the Iphoto program for making photobooks...".  Yes,  I was quite surprised, too --who knew? heh heh--and did a further search to discover where one might find this Iphoto book program,  thinking it is exactly the sort of thing I need!

Imagine my surprise and horror amusement when I realized,  after a lengthy and inept convoluted search, that the Iphoto book-publishing software is contained right in my Iphoto program itself!  No doubt, I concluded,  it is hidden in some sort of obscure file menu, too.  (As a matter of fact, I've been meaning to contact Apple about their notoriously user-unfriendly operating system.)  Imagine my  embarrassed incredulity good-natured chuckling when I opened Iphoto (following the step-by-step instructions on a helpful site I stumbled upon in my meandering search) and found the clearly-designated, centrally-placed, crystal-clearly-drawn Book icon right there on the main toolbar directly adjacent to the edit button bar which I happen to click on roughly 500 times per day! from time to time.  A single click on that simple, attractive little icon and a whole new world of colourful, versatile and easy-to-use photobook software was opened before my disbelieving eyes.  It was almost too much to bear a joy to behold!

I'm sure Those in the Know will cheerfully join with me in agreement that sometimes it is the company which claims to have the most user-friendly and simple approach to the computer age that tends to let down the side now and then on the most straightforward responsibilities toward its customers.  I don't like to criticize,  no matter how well-deserved the criticism,  but sometimes one must do the right thing and just speak the truth:  Apple clearly dropped the ball here,  failing to communicate effectively with its customers about its amazing adequate little program and I honestly feel that some sort of restitution (do I hear "coupon"?) is in order.  How can any customer,  especially one as scatter-brained busy as YoursTruly,  be expected to find out about nifty little programs like the Iphoto book and card- (oooh!  and calendars, too!  Missed that before!) builder software and fully-integrated publishing links,  if they do not make a better effort to inform?  Relying on user-manuals (who really reads these? Come on!),  daily or weekly email tips (annoying - I delete them immediately, of course) and specific-purpose icons prominently displayed on the toolbar (anyone could miss those) are - let's call it like we see it, my friends - weakly ineffectual methods of disseminating information.

I'm disappointed in Apple,  but I am a forgiving woman.  I plan to plunge in eagerly to create more books with their fabulous software  give them a fair chance once I've given myself a little time to recover from this entirely disillusioning episode.  The program appears to have an unbelievable array of choices in formats, fonts,  background colours, versatility of photo layouts an adequate set of tools with which to create the most fantastic photobooks I have dared to hope for  a passably acceptable final product.  The fact that I will no longer have to undertake the tedious process of converting each and every picture file into a JPEG file and save it to yet another folder in order to be able to access it through that dinosaur program from My Publisher (how do they stay in business, I ask you?),  is one tiny ray of sunshine in an otherwise dully unhelpful vista* of Apple mediocrity.

So, without further ado, I will sign off here and race to open my Iphoto to continue working feverishly on the project I began the moment I realized that awesome program was there right under my nose all along  prepare myself mentally for another productive and creative week on the photo project.

*alert people in the know will have caught the clever pc reference to an even less helpful and more frustrating operating system.  I suppose things could be worse and I could have one of those!  Thank the gods for small mercies!

Today's Photo (I don't think we should be slaves to logic and order, as I am sure Those in the Know will agree, so I have taken the liberty of choosing a photo I happened upon during a recent hour of  random photo-file jumping): 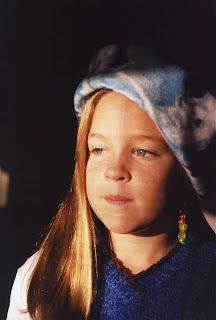 Posted by NiftyWriter at 5:45 PM