It is yet another sunny, bright, fresh February morning here, which is nice, I guess.  I'll leave it at that.  Although, to be quite honest, I do feel that neverending stretches of the same, same, same weather can be a little wearing, don't you agree?

Listening to the news on the radio this morning, I admit I felt more than a twinge of envy directed toward the northeast where they are enjoying yet another marvelous snowstorm, this time shutting even New York City down for a, no doubt, joyfully welcomed statewide day off.  Really, that part of the country has collected an embarrassment of riches in the annual snow tally, and I for one am a little tired of hearing them brag about it.  With all that is happening in the world right now, surely radio airtime could be better spent covering things that really matter!  I notice that the Face of the 2010 Olympics was not mentioned even once so far this morning, with all the gleeful excitement about this latest blizzard clogging every brain cell in the media, too, apparently.  Look, it's all fine and dandy to be on such a record-breaking roll, but there is such a thing as modesty and balance.  Let's get our priorities back in order, people, please.

The Olympics last night were, as usual, fabulous.  For the most part, the coverage is so well done that I often feel as though I am actually there.  But for one significant omission, it might have been completely riveting.  You know I'm not one to quibble over details,  but I'll just mention that appropriate references to our golden girl were noticably reduced last night, and I'll say no more.

The coverage managed to be interesting in spite of that glaring deficiency, although to be perfectly frank, I'd like to point out that we saw all the evidence we need to explain why Nordic events have been rightly kept in the background since 1924.  Yes, yes,  we all know how the ragtag team of determined US Nordic athletes persevered in an underfunded and underappreciated sport for over a decade building it inch by hardwon inch -- at least those of us who heard about little else for 13 or so interminable minutes earlier in the year on a weekday morning interview on NPR know about it (I forget what date that was - it was bad enough that I had to listen to it at all when all anyone needed to know about was how the cheese remedy was working for Lindsay) -- but I ask you:  was it really necessary to waste dedicate several Olympic coverage minutes to the final stretch of the Nordic Combined event last night?

What is so compelling about two superbly-trained athletes making up a nearly 35-second deficit in a grueling event to catch up with the leader--the 2008 world cup champion--and then completing the 10km ski with him breathing down their necks the whole way,  suffering setbacks yet fighting back with manly grit, strength and endurance to take both silver and gold for America?  Some people say that footage like that is a powerful testament to the perseverance and extraordinary talent of true Olympians,  but I say it is all bunk.  Where was the lightning speed?  The spectacular falls?  The gleaming white teeth, long golden tresses and spontaneous tears?  As an example of the finest in human endeavor that the Olympics purports to represent,  I think the Nordic World is plainly a bust.

Other events last night included a ho-hum Women's Free Skate and the Women's Hockey final which, let's call a spade a spade, could have been phoned in.  No doubt legions of fans are berating themselves this morning for wasting $50 on tickets to these events (ticket prices entirely estimated by me--after all, who really cares what they cost since none of us were able to attend an Olympics way up north in the back of beyond, anyway!).  There was a brief exciting moment as the camera panned across the spectators during the hockey game when I thought I spied a familiar golden head among the crowds of American fans, but alas,  it was only some senator or member of hockey royalty or something like that. Who cares.  All of the cheering and screaming and so forth was a bit over the top, in my opinion, and I strongly suspect that alcoholic beverages must have been widely consumed in the arena last night.

All in all, better than a night of NCIS reruns, I suppose, but not the quality Olympic television that I've come to expect.  As I said before, the Olympics themselves are always fabulous,  but the viewing experience so depends upon the quality of the coverage.  Too much attention paid to second-rate events and the regrettable omission of adequate coverage of the off-day activities of the Greatest Skier Ever can reduce what could have been to what barely was.  But,  I am nothing if not fair-minded so I will be giving NBC a chance to redeem itself tonight.  I urge anyone who is reading this to be the bigger people and do the same.  Here's your chance NBC- this time, get it right.

Photo Project Update:  I am pleased to report that, in spite of many  distractions difficulties, I did manage to finally get a little more organized move forward with my auxiliary To Do list and have made progress.  I decided that the reason why I was having such a hard time following the list,  beside the fact that I hadn't made one out in days (<--irrelevant), was because it was too vague and general.  I decided that certain priorities on the list require sub-lists.  It sounds like complicating the issue, but really it will simplify everything!  here's an example:

Blog Post (obvious)
Photo Project (but must work within daily chores, so first...)
---Laundry
---Grocery trip and errands (return items to kohls that seemed like a good idea at the time, but were stupid beyond belief)
---Start Supper
---

Wait.  This makes no sense.  Here's a better one:

Blog Post (yes, done--practically)
Photo Project (vague--add sublist)
Laundry
Grocery Trip (scratch that--I don't feel like it and besides we have a ton of leftovers)
Start Supper (see above--I've been cooking like a slave all week; I deserve a break)
---

Something seems to be missing here and I can't put my finger on it.

Oh well, who cares?  I often think people get way too hung up on lists and plans.  While there is a time and place for them for some people, I suppose,  I am convinced that a truly creative mind must never be constrained by such rigid guidelines.  I wouldn't make an issue of it among friends, mind you, knowing how lesser talents require the paint-by-numbers approach to projects in order to move forward, but it is my private conviction that my openness to confusing and unrelated tangents  mixing it up a little, creatively,  is the secret to my success.

So, yesterday, I abandoned that loser of an idea---(improving all of the already-scanned photos! Yegods!)-- and what a relief that was!  Imagine the paralyzing tedium of going over photos I had just scanned last week  again and again to correct them!  Maybe it wouldn't be a waste of time, strictly speaking, but let's be honest here:  it would be unbearably mind-numbing. I might as well admit it- I need variety.

So, I switched gears/changed it up/went for a fresh new angle!  I began work on the first photo book!  So far, I have improved and dragged in about 3/4 of a year's worth of photos to a book layout tray and today I hope to begin arranging pages.

Well, it's taken me far too long to complete this post today and I am already behind on my To Do list.  Lucky for me,  though, I am no slave to lists!

Oh, I need a photo for today from yesterday's efforts.  Well, this one isn't actually from the year I am currently working on (you know how one thing leads to another),  but it involved a delightful skip down memory lane and has thus earned the honors for photo of the day! :D 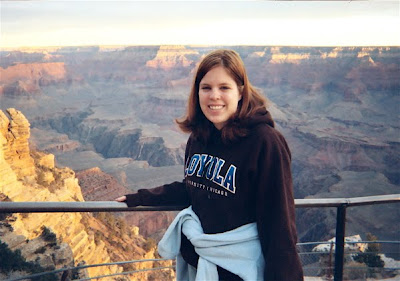 Posted by NiftyWriter at 1:27 PM