It's another beautiful winter's day and I am thinking (for the hundredth time in the past few years): I really like February!   February is the month when you really start to notice the days lengthening.  Up until a few years ago, I have to say that I didn't pay enough attention to that;  I think because February is usually so darn cold, it is easy to overlook the fact that the signs of spring are already there in the earlier sunrises and the later sunsets.  I know it's been going on since the winter solstice, but really I don't usually notice it until February.

Scott took the boys up to Cascade Mountain yesterday to ski/snowboard.  Obviously, that meant that I had a whole free day to scan and file and sort and organize!  So, naturally, I didn't scan a single picture!

It was a gorgeous day and I just felt it was necessary to get out and breathe in some fresh air.  I was originally planning on a nice brisk walk.  However, I remembered that I had a little shopping to do, so I got ready and went to Kohl's.  I had a grand time in the baby department choosing a gift for friends who just had a baby boy on Friday--and an adorable spring dress for his big sister!  That was a lot of fun!  I miss shopping for little ones, but I know I will have that joy again in the future with grandchldren--some day!  My feeling is, with five children of my own, at least one or two of them will eventualy provide me with grandchildren!  I can wait, but I am really looking forward to that--imagine the perfect joy!  All the fun of children and none of the worry! :D

Now, you ask, did I dash back home and get to the photo project?  Well, no of course not.  I work far better if I mix up the routine a little, don't you know?  So, I looped by the grocery store for cards and a loaf of bread to go with the soup I was planning to make for dinner.

When I got home, it was about 2:00, so a great time to take the dog out for a quick stroll.  Good old Minnie!  She is 15 1/2 years old and you'd hardly think she was a day past 7 or 8!  Spry and lively, she loves a little walk.  We kept a sprightly pace to the mailbox and back and then around the house and back to the mailbox and then back inside.  I put the kettle on for a cup of tea and Minnie promptly plopped down in her basket and went out like  light.

I then set to work making a hearty vegetable soup.  Because Scott and the boys were out of state snowboarding,  I knew they wouldn't be home before dark and probably not until after 6.  So, I have come up with a great solution to making soups which I can prepare earlier but which will still taste fresh with tender-crisp vegetables.  I start the broth on the stovetop, bring it to a boil, throw in the other ingredients and then transfer it to the crock pot!  I set it to high briefly and then down to low and the soup will be gently simmered for hours, without turning the vegetables to mush.  I got this idea from reading about Chinese soup preparation.  The writer in one article stressed that soups retain their maximum vitamins and health benefits if allowed to simmer very gently for several hours.   I've never been able to get anything to simmer gently enough on the stove top to leave for hours; everything always boils.  I had already switched to simmering spaghetti sauce in the crock pot a few years ago to get around this problem,  but it had never occured to me before to try it with soup.  After reading the article,  I had an AHA! moment (or, rather, an "Why didn't I think of that before? (forehead slap) moment), and decided to try it out.  It works like a dream!

So, I polled the refrigerator to see what fresh veggies we have that I could use up and basically threw what I had too much of in the pot.  A whole bunch of celery and leaves, big onion, 4-5 fresh carrots, some chick peas, garlic, tomatoes, and a tin of stewed tomatoes and chicken broth. I let that all simmer for a few hours in the crock pot and then I added some quick cooking barley and all the spinach left in the fridge, chopped up.  It was sort of a minestrone,  but sort of not.  I had no zucchini or mushrooms and the idea was to use up what I had on hand.  Frankly,  the soup was delicious,  anyway!

So, then, you wonder, did I get to the project?  Well, sort of.  Then, I sat down in the den and began to look at photos again.  My rationale is that I cannot scan until I have sorted a little bit.  But, really, I have all of 1996 (at least all that I could find so far) sorted and stacked up on the side table, but yesterday I was dipping into 1997.  Just looking.  And remembering. :-)

I didn't scan any.  Well, I scanned one, which I will post below.

Instead, I came to the conclusion that I really need to mix up the routine of the project a bit in order to stay focused.  Yes, I know that sounds counter-intuitive---splitting up the routine sounds like it would split up the focus!  And that is true!---but I have a jumpy mind and it keeps running off on tangents and if I do not allow myself to pursue the tangents - at least now and then - I lose all motivation to continue.  Well, not all motivation - I do have a modicum of self-discipline - but the enjoyment leaks right out of it.

So, here's my idea:  I'm not going to try to proceed in strictly chronological order, as I had initially intended to do.  Instead, I am going to scan the years of each of the children's births first.  At the beginning of this project,  I had started randomly with 1994 because it was the earliest year in the most organized box of photos I had found.  So, that made sense at the time.  I figured I would go forward from there, finish that box, and then start each other box, slipping photos in to the files already begun, each to its appropriate year.  I scanned 1994 and 1995 and have begun 1996.  I'll still follow that method as I get further into the project, but to keep it fun for now, I think I will switch it up after finishing 1996.  I'll pause to make up photo albums of the two youngest boys' first year.  I'll send it off to the publisher and have the first books of baby photos already done!  Then, I will go back to Kiki's first year, make her book, then Jessie's and then Jack's.

This will probably be a better plan for me for many reasons.  I was worried about having a huge volume of photos at the end and all in tiff form.  Tiff is the best quality for digitizing but not easy to send or print without conversion.  I have learned over the past few years that once photos are in files unconverted,  it is easy to lose track of them and fall back on the same few dozen photos which were converted to JPEG at some point for some purpose along the way.  I was really afraid that I might lose track of where photos that I love are, and possibly lose my energy and motivation to go to the next step which is making albums and prints for framing.  By doing it as I go (at least some of it), I can kill two birds with one stone:  I will have albums coming along as I proceed, and I will reduce my own boredom, too, by breaking the monotony of just scanning and scanning.  But, best of all, by making albums as I go along,  I feel there will be a greater opportunity for me to remember to select the very finest photos and possibly some almost-forgotten photos to bring them into our daily lives--in the albums and in prints which I can frame.

I find if I focus too hard on a single task at hand, I often miss opportunities to increase the depth of enrichment which is possible with any project.  I think that is why my mind is inclined to go off on tangents and why I lose my enjoyment/motivation in a project if I attempt to stifle or ignore these tangents.  At least, that's my story and I am sticking to it! :D

So, today I will get back to scanning 1996 without delay.  With the lovely goal of making up two wonderful albums as soon as these photos are scanned, I am filled with renewed enthusiasm!

But first, today's favorite scanned picture.  From 1997 - oops!  Yes, I darted ahead, of course,  but that was before my new plan!  From now on,  the photo project will be more orderly, honestly! - Kenny (front) and Teddy (looking over K's shoulder) in our garden October, 1997.   Enjoy! 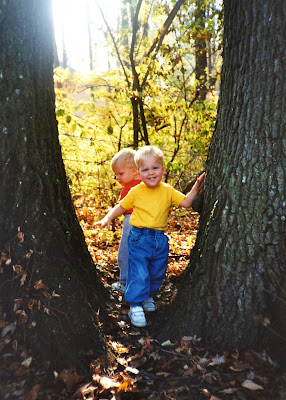 Good day to All!
Posted by NiftyWriter at 9:29 AM