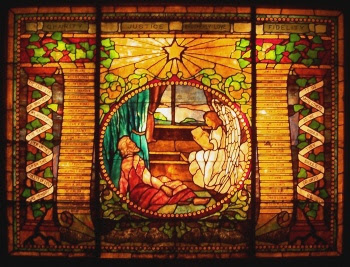 I don't know if recent discussions I’ve had have made me over-sensitive, but today I swear that people were shoving their religion down my throat nearly every second of the day. It's so rude and intrusive, and I find my ability to tolerate it is going down by the week. I used to have no problem with religion- I’m a regular, moderate church-goer myself!- but something about the frenzy of religiosity in the past few years, and the people going berserk trying to convince themselves that they are "saved" (from what, exactly?) is really starting to seem like a bizarre and disturbing social trend. As a private obsession, extreme religiosity is an individual matter. But when these people start forcing their religious obsession on me, I find I object. A lot.

First, I had an appointment with a new eye doctor. Dandy. In his office, there is only one choice of reading material: a Bible. I've seen Bibles in business settings a lot lately, in dentist and orthodontist offices, too, so I wasn't surprised to see it there, but the absence of any other type of reading material at all seemed a little weird.

In the inner office, there was not only another Bible but a plaque on the wall saying 'The only life worth counting is eternal life' and more Bible verses (presumably to inspire the optometrist and get him through his worthless, pointless day) all over the desktop, too. I was feeling a little queasy as he spent a little too long leaning in a little too close for the most thorough eye exam I have ever had in my life. Very creepy. I'll never go back there.

Next, I went for gas. For gas. Yes, I was at a self-serve gas station, minding my own business, when out of the loudspeaker bleats a simpering female voice crying about what the Bible tells her.....never going back there, either, obviously

Then at our closest grocery store, a tape of what sounded like some sort of religious terrorist music was playing and I thought, Damn it, I hate this! I have to stop shopping here! I'd noticed their strangely militant music ("we're all going to be raptured while "they", the rest of "the World"-you and me: the legions of Satan's minions I presume- are all going to burn in hell" ) a while ago and wanted to switch grocers, but they are so darn close when I just need a gallon of milk! After today's malevolent musical message, though, I think it is time to take a stand. I don't want my kids to soak up those unhealthy messages.

Finally, I went home and picked up the mail. There was a bill from a contractor who did a small job for us earlier this week. The bill, which looked normal enough on the front, was sealed with a shiny sticker and a Bible verse. Inside, in the same paragraph with the list of services provided was a lengthy evangelical diatribe! I could not believe the sneaky approach! Needless to say I will pay that bill and request them to take us off their mailing list permanently.

It is just too much!

Why do we, as a culture, put up with this? We would never tolerate this type of unhealthy obsession about anything else but religion, yet we give people claiming "Faith" a free pass to not only obsess to the point of mental illness, but to barrage the rest of us with their obsession, too!

When I got home, I was telling my husband about my day and how I felt like everywhere I turned I was being bombarded with a level of religiosity which I was beginning to find offensive and aggravating. I wondered out loud how a person like me, active in church (long before the recent resurgence of "church" fever) and who has always appreciated the beautiful rituals, message of loving one another, and sacred music--how did I get to the point where religion is starting to offend me? Because it is starting to offend (and alarm) me!

It seems to me that what I knew as "religion" and "Faith" has been subverted by a self-serving, obsessive mania. People don’t try to love one another anymore, they love themselves and obsess about Jesus or God like lovesick adolescents, not as reasonable, thoughtful adults. It's not about God nor about faith or love...it's about them. Them... feeling good about themselves, them... feeling better than others and most of all, them... trying to buy some relief from their fear of death, fear of not counting in this life, and fear of failing at life. And they are provided with a fundamentalist belief system that says none of that matters- only the afterlife matters- you can’t fail at life if this life doesn’t count.

I think that is nothing more than a license to duck out of responsibility in this life!

That, I realised was the nub of the issue for me. People are wasting away this wonderful life they’ve been given (by gods, by nature, by whatever you believe in). They make little effort to love their fellow man, but trample all over their fellow man because nothing but their eternal soul matters- and their souls are unaffected by what they do, or fail to do, on this earth.

The potential for religiously-justified cruelty toward others is worrying-not to mention the nauseating narcissism-and we've seen it growing over the past decade already. The thought left me depressed.

Then Hubby said "Abou Ben Adhem, may his tribe increase!" And I had to laugh. This was one of the many poems that my dad used to recite from memory at any time that seemed to warrant a good literary verse or two. My dear spouse said, "I think your dad's poem sort of stands for why you feel like this; you grew up with a different take on faith and devotion.".

Abou Ben Adhem (may his tribe increase!)
Awoke one night from a deep dream of peace,
And saw, within the moonlight in his room,
Making it rich, and like a lily in bloom,
An Angel writing in a book of gold:

Exceeding peace had made Ben Adhem bold,
And to the Presence in the room he said,
"What writest thou?" The Vision raised its head,
And with a look made of all sweet accord
Answered, "The names of those who love the Lord."

"And is mine one?" said Abou. "Nay, not so,"
Replied the Angel. Abou spoke more low,
But cheerily still; and said, "I pray thee, then,
Write me as one who loves his fellow men."

The Angel wrote, and vanished. The next night
It came again with a great wakening light,
And showed the names whom love of God had blessed,
And, lo! Ben Adhem's name led all the rest!

As my hubby said to me, most of these other people we run into each day, blaring on about the Bible and proselytizing left and right...they're all trying to get into that book of gold...and they miss the point entirely.
Posted by NiftyWriter at 2:35 PM