Ho ho ho!  It is not really Halley's Comet,  of course,  but it is something almost as exciting!  Or I ought to say someone*!  Yes,  everyone's favorite correspondent (Moi*!) has returned!  Although I am sure I have been greatly missed by Those in the Know,  it is really best not to dwell upon the fact that I have been a complete flake and simply haven't bothered to write for awhile the unfortunate circumstances (sheer idleness, as always  extreme busyness, as usual!) which have prevented me from writing lately.  I have had many  several  one or two some notes asking about my absence from the world wide web,  which has been very irritating  heart-warming, to say the least.   I am responding to popular demand,  so I expect everyone to buck up now!

We are expecting a full house this weekend!  Kate, Jessie and Jack (and a guest or two!) are all converging upon our cozy homestead for a couple of days and I couldn't be more flustered delighted!  Naturally,  I am the soul of hospitality and I am constantly urging the children to come home often and bring as many friends as they would like!  One wonders,  however,  if it is really necessary that every single chick and child has chosen the same weekend to descend upon us!

Yes, yes, I know I have often said that is exactly what I wanted, but surely to goodness sensible people can read between the lines!  It is all very well to enjoy the concept of a full house,  but the reality of nearly a dozen people on the floor is a different kettle of fish entirely!  And, as TITK are well aware,  it is Yours Truly upon whom everyone relies to clean the fish,  dress the fish and cook the fish,  not to mention to set the stage for a million magical moments!  Needless to say,  I always rise to the occasion  (even though it is often very inconvenient),  but sometimes I think I am just too good!

We are having our house painted right now.  It is a big job that we had been planning to do for quite some time.  Really,  it has needed to be done for as long as we have owned the house.  To be perfectly frank, actually,  this house needed a decent coat of stain for probably about twenty years before we bought it.  I am not one to criticize others,  but a less charitable person would be hard-pressed not to point out that the previous owners clearly dropped the ball there.

True,  I we were a little slow getting around to this task (mostly Scott, really),  mainly due to my incessant demands for interior renovations Scott's desire to improve certain areas inside the house.  I am not one to fuss,  as TITK are well aware,  but one does wonder if a fancy schmancy kitchen and bath is really of higher priority than weather-proofing and protecting the very integrity of the house itself!   I was constantly complaining about the rundown interior  perfectly sanguine about the dated charm of the house as it was,  and I am sure that I mentioned the importance of a good roof and a properly stained house at no time whatsoever several critical junctures.  Alas,  my dear but impractical spouse bowed to my ceaseless whining  gave in to his desire for a kitchen that worked and a bathroom that was larger than a linen closet luxury and put the interior renovations ahead of the exterior renovations in the family planner.  I was over the moon! My dream kitchen! At last!  willing to be agreeable about that plan,  since the roof seemed fit enough to withstand another few winters and the house stain was so faded it almost looked like it was intended to look like that.

Anyway,  I think we just made it under the wire.  The roofer came last month.  When he first came to inspect and give us a quote,  I must admit,  he made me a little uneasy.  The man had a disconcerting habit of standing with mouth agape, leaving sentences trailing off and I thought he seemed a little flushed about the forehead and neck.  Scott thought he might have been appalled surprised at the condition of the roof and the incredibly thin ice upon which we had been skating for the past several years while indulging our whims with indoor sprucing the remarkable durability of that fine 50-year old workmanship!  Naturally, I told the roofer that we intend to secure the cheapest possible quote for the new roof while expecting it to last for at least another 50 years.  I must say,  that man appeared to have been suffering from some sort of intermittent apoplexy:  during a perfectly civil business discussion,  I am sure I observed his complexion change colour at least 5 times!  I believe I have now witnessed for myself what novelists refer to as a "puce"-coloured complexion.

Be that as it may,  we embarked upon the ambitious dual project of a new roof followed immediately by the staining and painting of our entire house and trim and the gazebo, too.  I think I posted a photo of the house mid-roofing a few entries back (above).  Here are some photos of the house after the roof project was completed:

Once the crew began applying the stain,  the difference was shocking.  I We knew that the old stain had faded to a point beyond embarrassing,  but this photo shows you just how much:

Finally,  today I was able to snap a photo of the new and improved house after the painters put the shutters back up on the front.  The second floor shutters are not yet up here,  but I am too impatient to wait another hour or two to take a better photo you can get the general idea. 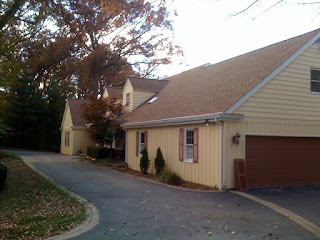 We are really pleased with the results so far! It is a big change,  but I love it.  I think the house now looks like it is happy and smiling,  which is a far better representation of the disposition of its inhabitants (especially Your Faithful Scribe!) than the dour and scowling appearance which preceded this facelift!

We certainly hope that this will be the last renovation for a very long time!  It does seem as though we have been renovating this house for years.  Hold on a minute!  As a matter of fact,  strangely enough,  we have been renovating this house for years!  Five of the seven years since we bought it, in fact.  I am not one to look for trouble,  but I am very much afraid the first renovations will need updating before the last renovations are completed!  Such an unsatisfactory state of affairs!   Oh well, who cares?  I am nothing if not  ready, willing and able to dream up more ambitious and no doubt highly inconvenient and disruptive plans patient and resilient!

I have plans for more garden work and Jessie is working as I type on a new wreath to go up on the garage between the two windows.  Her friend Michael claims to be helping her,  but from where I sit it appears that he is being quite a nuisance.  Every time I call out to Jessie to bring me a cup of tea or whatnot,  they are busy with glue gun and wires and so forth!  It really is too much!  I feel certain that if Jessie did not have a guest,  I would have a piping hot cup of tea at my elbow right now  things would be going along much more smoothly and pleasantly!  Nevertheless,  I remain the epitomy of the calm, elegant hostess.  If I have to make a cup of tea for myself,  so be it.  Far be it from me to make a fuss. One has to wonder,  however,  how this younger generation can sleep at night. 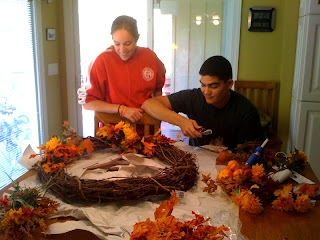 That is about all I have to write about today.  I must now go shopping for BBQ foods for a crowd.  The entire family will be home tonight and together for the first time since Kate's graduation in May (I think! Maybe not, but that is immaterial. The point is that it has been ages!).  I will once again create a delectable treat for dessert and dazzle them all with my flair for entertaining!

Good day to All!