I can hardly believe it is Memorial Day weekend at last!  The boys can hardly believe it even more,  since it means that their school year is virtually over.  Really,  it has been virtually over for weeks now, it seems,  but this is the official "virtually over"!  Next week,  they only have an outing to Six Flags amusement park and a general assembly on Wednesday and the younger boys are truly finished.  Jack has to present his senior project on Wednesday and graduate on Thursday and he, too, will be finito*!

Scott and I will then be the parents of three high school graduates (one college graduate,  one college junior and one college freshman)  and two high school freshmen!  Where, oh where,  did those years go?

In other news,  the tree-cutting firm in its wisdom has decided that 8:00 AM on the first morning of the Memorial Day weekend is the ideal time to begin a tree removal which was ordered back in early April!  With that decision firmly made,  they rumbled with their heavy machinery past my bedroom window at practically the crack of dawn today!  Those in the Know might not be aware (unless you read my Facebook status last night!)  that I had a particularly vexing exciting evening** followed by a late night*** and quite frankly I needed my rest!

But, there is no rest for the weary,  as they say (nor for the wicked,  apparently - hello, tree removal crew!),  so I had no choice but to throw back the covers,  rise and shine.  Fortunately,  I am unmatched in my ability to rise and shine!  My admiring family tell me this all the time.   (Well,  they would tell you if they were not already miles from home on various errands,  having arisen hours before me - and Edward actually said that he was "afraid"  to ask me for his allowance after one glance at my face as I staggered breezed out of the bedroom the other morning - what could he possibly have meant by that, I wonder?  I am nothing if not a morning person!).

Anyway,  what a delightfully busy day I have lined up!   My original plan was to prepare the guest room for Kiki's friend Lee first thing in the morning,  and then get outside before the sun comes round to the pond and plant the second order of plants which arrived....oh yes,  did I mention that?   Yet another order of pond plants has arrived - on a Friday again! - and I am now forced to happily planning to deal with them forthwith.  There is plenty! nothing I would rather do than spend the holiday Saturday up to my armpits in murky pond water,  picking up algae-festooned rocks in order to poke slimy pond plant roots into the substrata.  (I do not even know if "substrata" is the correct word here,  but at this point in my stolen holiday,  who cares?).

After that,  if the gods are smiling,  Scott will have arrived at long last from his trip and he  we can begin the preparations for our BBQ tonight.  We expect Kiki and Lee around 5-ish, at which time I hope to have completed all house and garden chores!   Let the relaxation begin!

Photo of the tree removal aerial-lift truck.  The enormous wood chipper is around the side of the house - right outside our bedroom window!  Egad!  What an unholy racket that thing makes!! (but what a beautiful morning, n'est-ce pas?): 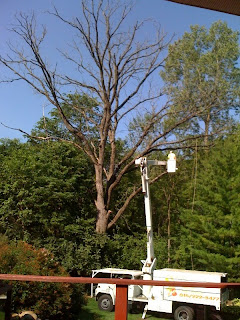 Good Day to All!  And Happy Memorial Day Weekend!
Fly your flags and honour fallen heroes.

* If TITK think "finito" is not a real word,  I expect you to be polite and don't mention it.

** Scott was due home last night,  but thunderstorms grounded his plane in Augusta,  so he will not be home until this afternoon.  I am the perfect company wife,  but I could cheerfully throttle the powers that be who plan these incessant weekend trips! it is all a bit much sometimes!

***Jessie decided on the spur of the moment (really!  At about 4PM yesterday!) to rent a car and drive home for the weekend,   so I had the annoyance pleasure of anticipating her arrival late (late! and I was tired!) last night.  Almost on the stroke of midnight,  she pulled up in a smart little red VW bug which made me green with envy  smile.  That was all bad enough  lovely,  but after 7 hours alone in a car there was a lot of pent-up conversation to be had!  We had a very late night.

I am so glad Jessie came home, and so glad Kiki will be here tonight and so very glad that we will all be enjoying our Memorial Day BBQ together!

Life is good!
Posted by NiftyWriter at 11:14 AM